Who is the first YouTuber? Find out everything about YouTube's first-ever video!

Me at the zoo YouTube by Jawed Karim is the first ever YT video.

Now that you got an answer to your question on what was the first YouTube video, let’s get to know when it was posted, how many views it has, and its duration. 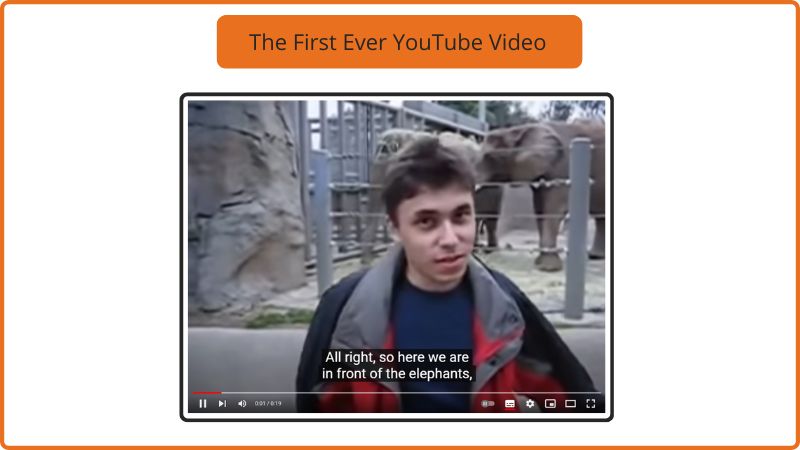 As we mentioned, Me at the zoo YouTube by Jawed Karim is the oldest video on YT. Wouldn’t you want to know what is the video about?

This first YT video was uploaded on April 23, 2005, and is the first and only video that Jawed posted. In the video, he’s at the San Diego Zoo and is talking about the elephants behind him.

He begins the video by saying, “Alright, so here we are in front of elephants. The cool thing about these guys is that they really have really, really long trunks! And that’s cool!”

He doesn’t end up with his video saying the ‘like, comment, and share’ lineup that YouTubers usually say! He simply says, “And that’s pretty much all there is to say.” That’s it!

Currently, Jawed Karim’s video has over 243 million views on his video.

Q1. Who is the first YouTuber?

Ans. Jawed Karim, the co-founder of YouTube, is the first YouTuber. He posted the first video on YouTube on April 23rd, 2005. Currently, this video has 243 million views on the video.

Q3. What is the most disliked video on YouTube?

Ans. YouTube rewind remains the most disliked video on YT, having 19 million dislikes.

Q4. Who is the first kid YouTuber?

Ans. Ryan Kaji is the first kid YouTuber. He is also believed to be the most paid kid YouTuber. His channel “Ryan’s world’ was launched in 2015 to review toys.

Ans. ‘Despacito’ by Luis Fonsi and Daddy Yankee is the most liked video on YouTube in 2022. It has 7.9 billion views to date.

So now, if anyone asks you what was the first YouTube video, you will have an answer! Jawed Karim, the co-founder of YouTube, is the first YouTuber and uploaded the first video on the video-sharing giant. Who would know this small vlog would actually build a whole new profession?

So if you want to become a YouTuber, you don’t have to look up other factors like video editing skills, subscribers, and views. People only want to see your X factor and how you are good at what you do. You will slowly and steadily earn all of it once you gain confidence and constantly keep working towards what you are good at! Once you start getting a few views on your video, here’s how you can boost views on your YT videos.

How To Stop Videos From Automatically Playing On Facebook?